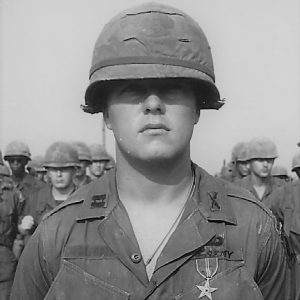 Bob Wolfgang graduated from Gettysburg College (PA) and was commissioned as a Lieutenant of Infantry on 7 June 1964. His initial assignment was with the 101st Airborne Division at Ft. Campbell, KY. After completion of Airborne, Officers Basic and Ranger training, he served with the 2nd BN (ABN) 506th INF until April 1966, when he volunteered for, and was assigned to the newly designated 4th BN (ABN) 503d INF which was on orders for Vietnam. The 4/503d deployed from Ft. Campbell on 6 June, the 22nd anniversary of D-Day, and joined the 173d Airborne Brigade (Separate) as its third maneuver battalion. From June 1966 to June 1967, Bob served as XO of Charlie Company and BN S-2. After DEROS, he was an instructor in the Vietnam Training Program at Aberdeen Proving Grounds, MD before separating from the service in June 1968. Bob then embarked on a 36 year sales career in the paper, printing and packaging industries. In retirement, Bob is involved in several volunteer activities, including serving as a patient escort at the Minneapolis VA Medical Center. In June 2007, he was invited to join the Memorial Foundation Board as Director of Heraldry, and was instrumental in bringing the Memorial to completion. He currently serves on the Memorial Foundation Board.