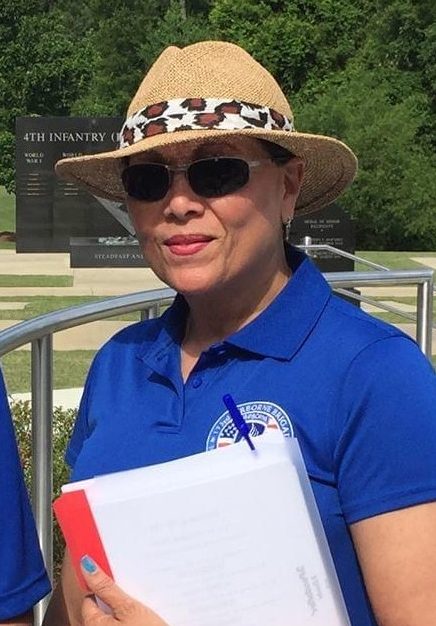 An Army brat, wife, and mother, Karen was dedicated to supporting the troops. Although never serving on active duty herself, Karen was recommended for appointment as an honorary member of the 503d Infantry Regiment for actively supporting the 503d Infantry Regiment Heritage, the 173 Airborne Brigade Association, and active and reserve components of the United States Army. She played an instrumental role in Chapter 24’s hosting of three annual national reunions Rochester. Specifically, in addition to general support of these events, she organized and executed Gold Star meetings and activities, arranging for guest speakers who addressed mental and emotional issues of concern to this elite group of individuals. In 2005, Karen commenced an ongoing participation in the 173d Airborne Brigade Memorial Foundation at Ft. Benning, GA. For five years, through the fundraising, groundbreaking, construction and dedication of the Memorial, she worked tirelessly in multiple aspects of the Foundation’s activities. Continuing her compassionate ministry to Gold Star families, she ultimately was appointed the Foundation’s Gold Star coordinator. She planned and coordinated all social and protocol activities of the Foundation, including dealing with veterans and active duty soldiers of all ranks from private to general. Her intimate knowledge of Regimental history facilitated her success in this role. In 2010, Karen became a Member of the Board of Directors of the 173d Airborne Brigade Memorial Foundation, serving as Secretary, Gold Star Outreach Chair, and Director of Protocol. She also served as the family readiness group leader (FRG) for Charlie Company, 2-135 Infantry Battalion, Winona, MN during the Operation New Dawn deployment to Kuwait from 2011-2012.